» New product for sale through the FTFF
by SP Dan Yesterday at 5:38 pm

» City of Long Beach SAFER AT HOME ORDER FOR CONTROL OF COVID-19
by f4mnect Yesterday at 12:27 pm

Range: Yellowfin croakers occur from the Gulf of California, Mexico, to Point Conception, California. They frequent bays, channels, harbors and other nearshore waters over sandy bottoms. These croakers are more abundant along beaches during the summer months and may move to deeper water in winter.

Natural History: The diet of the yellowfin croaker consists mainly of small fishes and fish fry; however, invertebrates such as small crustaceans, worms and mollusks are also eaten in large numbers. Spawning takes place during the summer months when this species is most common along the sandy beaches. Maturity is apparently not reached until the fish are slightly over 9 inches long. 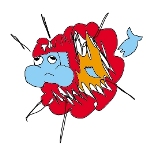 Guest
Yellowfin Croaker and Whitefin Croaker are super fun in the surf with 4LB line and small 1.5" grubs!