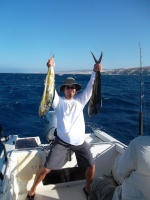 Posts : 50
Join date : 2011-08-02
Location : Rancho Cucamonga
I'm heading out to Mammoth with the girlfriend next week to hit the storm coming through. We might finally get to see some snow this year!

I was planning on stopping at PVR on the way up, but since its going to be snowing in Mammoth, i might not stop so we can get there during daylight. But since we're pretty much out of shape, we'll need a day off of the snow to rest, and I was thinking I would head down to fish.

Unfortunately I probably won't be tubing, (too much to pack between the snowboard, her skiis. plus, she doesn't fish, so I can't leave her alone on the shore. But hey, I still have the green light to fish!)

I've been to the dam area you enter just as you're leaving Bishop. Where else can you get in? I've heard somewhere by Tom's Place, but I could be way off. Anyone know?

Thanks, and I'll get pics up if I can make it down to fish one of the days

Posts : 332
Join date : 2011-04-08
Yeah there is another entrance off of Power Plant Rd. but its quite a hike to the res. from there, plenty of river fishing there though...
Spoons work well in that area even in the wind, lots of rocks and branches in the water though.

Posts : 50
Join date : 2011-08-02
Location : Rancho Cucamonga
Cool. Thanks. That's what it looked like on google earth. I stopped at lone pine creek on the way up. Pulled a couple small stockers out. They must have stocked a day of two before as there were a bunch of them sitting in a pool. Gonna snowboard the today and tomorrow, then probably take a day off Wednesday and maybe get a line wet.